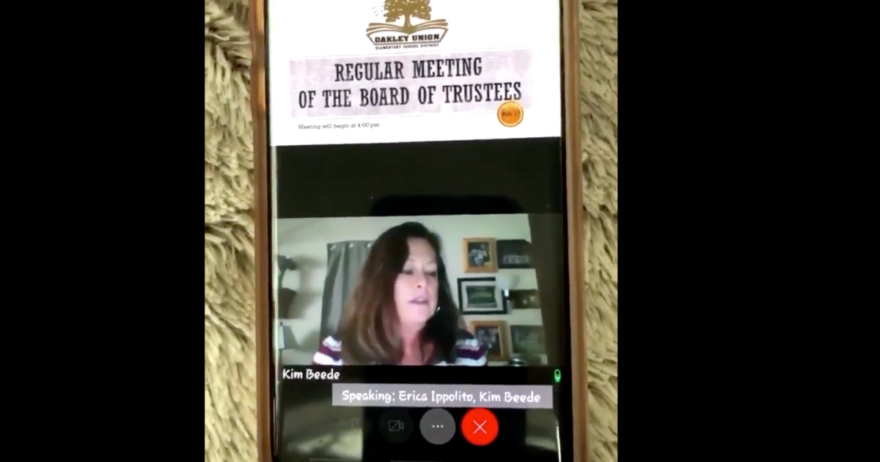 During a virtual school board meeting on Wednesday, some members of the Oakley Union Elementary School District Board of Trustees in California were caught in a hot mic moment mocking and swearing at the parents of the children in their charge. Parents subsequently posted the video online and launched a petition at change.org calling for the immediate resignation of the board members.

The video shows trustee Kim Beede first asking her fellow board members, “Are we alone?” before sharing her profane, bullying reaction to one parent: “Bitch, if you’re going to call me out, I’m going to f**k you up!” The other board members find this hilarious.

The video also shows board member Richie Masadas claiming parents want schools to reopen so they can get back to smoking pot. “When you got your kids at home, no more smoking dope,” he jokes. “That’s awesome,” Beede replies amid more cackling laughter.

A third board member, Lisa Brizendine, complains of parents that “It’s really unfortunate they want to pick on us because they want their babysitters back.”

A parent who posted the video to YouTube wrote, “This behavior is disgusting. As parents we should not tolerate for our representatives to behave in this manner. Oakley needs a new school board that will stand up for parents and their children.”

Thursday the superintendent of the Oakley school district issued a statement calling the board members’ comments “unfortunate” and “truly inappropriate” and that students “deserve better.”

Parents and students do deserve better. At the very least, parents deserve respect from school board members who, it should be emphasized, are elected and funded by teachers unions (like the National Education Association, America’s largest labor union) whose top priority is not education but amassing political power and throwing their weight around. Schoolchildren deserve not to be manipulated as pawns in the unions’ exploitation of the pandemic restrictions.

Rather than the resignation of the Oakley Union Board of Trustees, California parents and schoolchildren would be better served by the disbanding of teachers unions altogether.