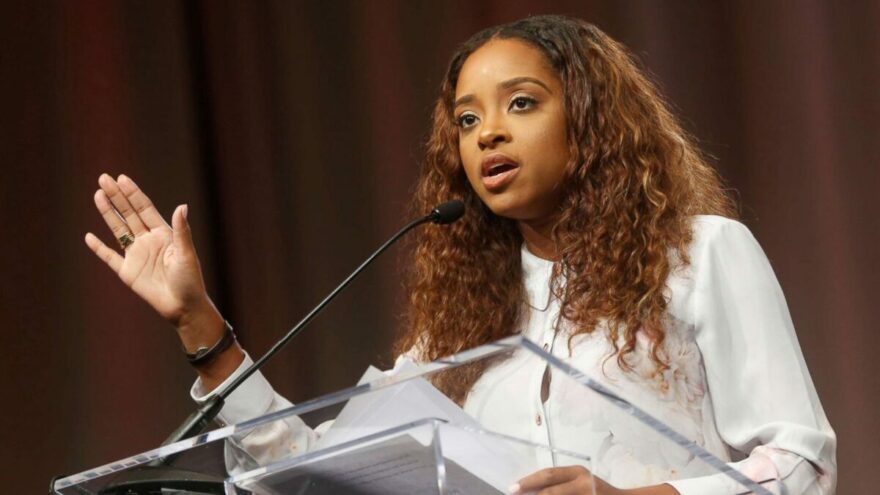 “It’s a state of emergency,” Mallory said in her speech staged to recreate the BLM riots in Los Angeles in May 2020. “It’s been a hell of a year. Hell for over 400 years. My people, it’s time we stand. It’s time we demand the freedom that this land promises. President Biden, we demand justice, equity, policy and everything else that freedom encompasses, and to accomplish this, we don’t need allies. We need accomplices. It’s bigger than black and white. This is not a trend, this is our plight. Until freedom.”

Someone needs to inform Mallory that blacks have freedom in America. But that’s not a lucrative, culturally-sanctioned position for a black person to take these days.

Mallory has a long association with notorious Jew-hater Louis Farrakhan, leader of the Nation of Islam, whom Mallory has praised as the “GOAT” (Greatest Of All Time). She also attended a Farrakhan speech in February 2018 in which he denounced Jews as ‘children of the devil’ and gave her a nice personal mention,” according to the Wall Street Journal. According to Tablet magazine in 2018, Mallory also claimed “that Jewish people bore a special collective responsibility as exploiters of black and brown people—and even, according to a close secondhand source, claimed that Jews were proven to have been leaders of the American slave trade.”

Mallory also called the founding of Israel a “human rights crime” after a tour of Israel in 2018 with the George Soros-funded Center for Constitutional Rights.

On the up side, the Grammy Awards show hit an all-time low in viewers this year, losing more than half of its already-diminished audience from last year’s show. So Mallory’s race-agitating speech reached about as many ears as the proverbial tree falling in a forest.